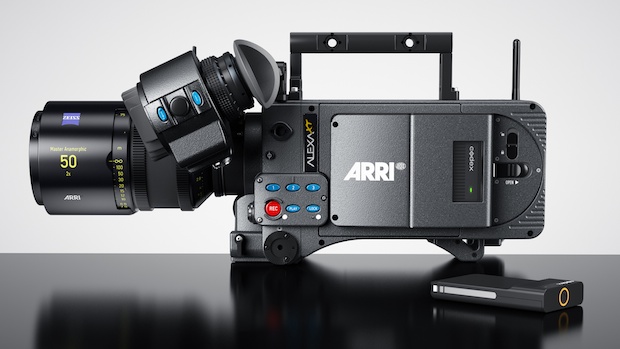 There are no better go-to cameras for shooting drama series, commercials, and feature films other than the ARRI cameras and the RED cameras.

This article will compare both ARRI and RED cameras, we’ll look at the pros and cons under key categories such as — a dynamic range, price, user-friendliness, and design.

ARRI is designed to bring exciting new creative possibilities into your shots and can be universally used for large formats and other high-end projects.

For the records, ARRI Mini LF was the primary camera used to shoot popular films such as The Batman, Dune, The Power of the Dog, The Protege – Made for Revenge, you name it.

The Arri Alexa 35 is a 4K Super 35 camera with a new sensor, delivering 2.5 stops with more dynamic range than previous models.

The sensor on the Alexa is 7.5 megapixels. It has a more gradual roll-off into the shadows compared to Helium.

The Helium’s gamma space clips information in the shadows, while the Alexa’s Log-C gamma space reinterprets it, resulting in greater visual and color detail in shadows.

With 14 stops of dynamic range, it can record detail in both areas of brightness without overexposing or underexposing.

This dynamic range is a crucial factor in creating the best image quality for any project. This is the reason that the Arri Alexa is often chosen by professionals.

By contrast, the Alexa has a more dynamic range in the highlights. The Alexa’s color details are more vibrant than the Helium’s, and it’s possible to grade the footage back to the correct ISO level without losing information.

ARRI Alexa vs RED Camera: Which is Cheaper?

There are several reasons to choose an ARRI Alexa over a RED camera:

ARRI has a lower price tag and is more affordable, making it an attractive option for most productions. However, its lower price doesn’t make it better. It’s cheaper, but that doesn’t mean that the Epic is inferior to the RED.

RED also enables filmmakers to experiment with camera bodies in ways they have never done before.

While the ARRI camera has more features and flexibility, it’s not cheap. It’s usually used for commercial productions. But if you’re a filmmaker who wants to produce high-quality videos, the ARRI Alexa is the way to go. Its color science and built-in look-up table make it more cinematic.

RED is also cheaper than ARRI, which makes it an attractive option for those on a tight budget. While it is true that RED offers a more cinematic look, you’ll still need to learn best practices and read RedUser forums in order to make the most out of your camera.

You can also emulate filmic looks with vintage lenses and the Black Pro Mist filter.

RED’s image quality isn’t perfect, but it’s more affordable. While RED has better image detail, it loses detail in underexposed areas. As a result, RED footage is generally cooler and neutral while Alexa footage has a warmer skin tone.

ARRI Alexa vs RED Camera: Which is Easier to Use?

ARRI Alexa is easier to use than RED. This is because the camera’s menu is simpler to understand and the camera’s full sensor can be used.

However, the RED sensor is more complex to work with. Moreover, you have to spend more time learning the different settings and menus of the RED.

There are pros and cons to both cameras. The Alexa is a more affordable and simpler camera to use. It also offers more flexibility in post-production.

It can upsample from 3.2K to 4K, which makes it future-proof as long as 4K remains a standard. The Alexa also has an outstanding highlight roll-off. Its shadows are equally impressive.

The RED camera has a reputation for offering a high dynamic range, but it’s not as powerful.

ARRI’s Alexa offers up to 14 stops of dynamic range. This is a significant improvement. ARRI Alexa is also easier to use than red, which makes it a better choice for many filmmakers.

Although RED and ARRI cameras have different sensors, the RED Epic-W camera has a Helium sensor, while the ARRI Alexa Mini has an Alev sensor.

This camera is better than RED in many ways, but you shouldn’t use it if you don’t need high resolution.

RED encourages filmmakers to use their camera bodies in unique ways.

ARRI, on the other hand, embraces digital freedoms within a familiar framework. ARRI cameras are renowned for their reliability and brand support, while RED encourages filmmakers to use new and innovative ways.

This compact camera comes in two flavors: the basic version and the Alexa Plus, which adds a wireless remote control and ARRI Lens Data System.

Additionally, the Alexa Plus has additional outputs and built-in position and motion sensors.

Its predecessor, the Alexa M, had its imaging and processing unit split into two separate sections, and was designed for use in 3D rigs.

Its successor, the Alexa Studio, adds a mechanical shutter and an optical viewfinder.

Its sensor is 4:3 for anamorphic cinematography, and it features an integrated lens synchronization system.

In all, RED cameras are awesome for shooting film series.

But if you want a high-end camera with a more dynamic range, easy-to-use features, with a durability seal, you should definitely go with the ARRI range of cameras.